Early Repayment Penalty for a Home Loan and How To Avoid it? 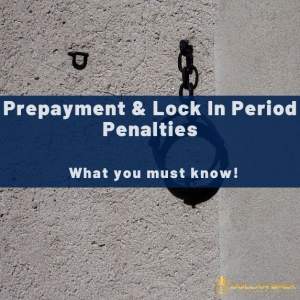 So you have got your eye on your dream home. Congrats! You’re a step closer to your home-ownership quest in Singapore, be it a HDB or private property. But finding the right property is only half the battle. The other half is to secure a home loan without having an early repayment penalty to ensure you have the most flexibility in your mortgage.

Most people will depend their mortgage loan shopping decision on the bank interest rates, which seems quite logical since these rates account for the vast majority of a home loan’s cost.

One of the main penalties attached to a home loan in Singapore is a prepayment or an early repayment.

Did You Know? According to Statista, Singapore has one of the highest home-ownership rates (almost 88%) in the world.

First off, a prepayment penalty generally exists because of a lock-in period on your mortgage. As the name implies, a mortgage lock-in period refers to a specified window of time (usually 1 to 5 years) during which your principal loan balance cannot be reduced and you will have to pay the regular monthly installments due to the bank.

There are various forms of early repayment or prepayment penalties but the most common ones are:

What is an early repayment or prepayment penalty for a home loan redemption?

A prepayment penalty is a fee charged by banks when you pay off the principal loan amount partially or in full before the lock in period ends. This penalty discourages you from paying off loans early and compensates the bank for the loss in interest due to a borrower paying the mortgage loan principal ahead of the lock-in period ending.

How much are early repayment penalties for a full or partial redemption in Singapore?

Of course, it can wipe out some of the interest savings you might have wanted to achieve from paying down part of your mortgage loan, therefore do be well informed of the penalties before making a decision.

Should you still pay off your home loan early?

By prepaying a loan, you can save on interest as well as free up money in your budget as you don’t have to worry about having a loan payment.

Early Repayment Penalty for Sale of a Property

What is an early repayment penalty when selling a property?

How much is the penalty when selling a property during the lock-in period?

If you need to sell your property during the lock-in period, you will incur a penalty of 1.50% of the entire principal loan balance without any future interest expense. For example, if you decide to sell your property within the lock-in period and have a loan balance of $800,000, the penalty to be paid would be $12,000. Do note that future interest expense is excluded and does not need to be paid back to the bank.

What is a mortgage clawback clause?

A mortgage clawback clause for home loans in Singapore, is a penalty imposed by banks for any rebates or subsidies provided if the mortgage is fully redeemed within a specific period known as the clawback period.

Usually, banks do provide certain benefits such as, legal fee and valuation fee subsidies or even shopping vouchers when you take up a home loan with them. For such, goodies provided, the bank would need to cover their cost through interest paid to them through the monthly repayments.

The period in which banks generally need to recover the costs of such rebates or subsidies is generally over three years and is referred to as the clawback period.

When happens during the clawback period?

The clawback period prevents the borrower from doing the following things:

Any of the above actions done within the clawback period will lead to the bank not being able to earn any interest from the mortgage and thus activate a clawback penalty which requires the borrower to pay back in full all subsidies and rebates initially provided.

How to avoid an early repayment penalty for your home loan?

Most mortgage loan packages come with a lock-in period. To avoid an early repayment penalty either by a redemption or a sale of the property, you should look for banks that grant a full or partial (up to 50%) waiver of this penalty during this lock-in period. More commonly known as a partial redemption or a waiver of sale clause, you can negotiate with banks upfront to include these conditions within your home loan offer letter.

Which banks allow you to avoid early repayment penalties for a home loan redemption?

As home loans in Singapore generally have two broad classifications depending on a fixed or floating interest rate, the prepayment terms will differ based on which interest rate package is desired.

For a floating rate home loan, the banks which allow you to avoid early or prepayment penalties are as follows:

For a fixed rate home loan, the banks which allow you to avoid early or prepayment penalties are as follows:

Do note that the above are not exhaustive as depending on a negotiation with your preferred bank as well as specific requirements, prepayment terms can be included within your mortgage package even if the bank does not offer it upfront.

Generally, we do see that Maybank, UOB and Bank of China are currently offering the most flexible prepayment terms on both floating and fixed rate home loans.

Which banks currently provide a waiver of penalty for a sale?

For a floating rate home loan, the banks currently providing a waiver of penalties for a sale are as follows:

For a fixed rate home loan, the banks currently providing a waiver of penalties for a sale are as follows:

As a waiver of penalty is much more expensive for a bank to offer, we do see that foreign banks, CIMB, Bank Of China & Standard Chartered include them within their home loan options to remain competitive with local banks in Singapore.

If you’re struggling with more such questions, fret not. Before making a major decision, first gain a sound understanding of how home loans work and then get any additional advice or insights from a home loan specialist from any bank or a mortgage broker in Singapore.

SORA Home Loan vs Fixed vs SIBOR in Singapore: 5 Questions to Ask!

What is a SORA rate and is 3M SORA vs 1M SORA better?

Early Repayment Penalty for a Home Loan and How To Avoid it?

HDB loan or Bank loan 2022: Which is cheaper and better to pick?

If you are looking to buy a HDB in Singapore, a common thought comes to mind, “Should I choose a HDB loan or a bank loan?” The simple answer is

What is a good credit score when applying for a home loan in Singapore?

Apart from certain credit grades (HH, GG, HX, HZ) it is usually possible to improve a bad credit score in as little as three months.